In the 19th century, before the development of the petroleum industry, whale oil was a major source of illumination, lubrication and soap manufacture and helped drive the industrial revolution. It was only replaced very recently in many critical engineering applications. The baleen with which whales filter krill (small crustaceans which are their main food source) was also used to manufacture women’s corsetry which was popular up until World War II.

At the height of the whaling industry in Eden 30 boats operated out of port and the town is famous for its whaling history in particular for the remarkable pod of killer whales that assisted the whalers of the Davidson Whaling Station.

The friendship between man and killer whales began with the Aborigines. The local Yuin people revered the Orcas as the reincarnated spirits of their ancestors perhaps because the killers would regularly herd passing baleen whales into the bay and as a result many whales became stranded providing a welcome feast for the people as well as whale oil which were used by the aboriginal peoples in their rituals. After the arrival of Europeans many aboriginals worked in the whaling industry and continued their traditional practice of ‘calling’ the killers. The local aboriginals were regarded as excellent workers by the early settlers and particularly noted for their prowess with harpoon and lance. 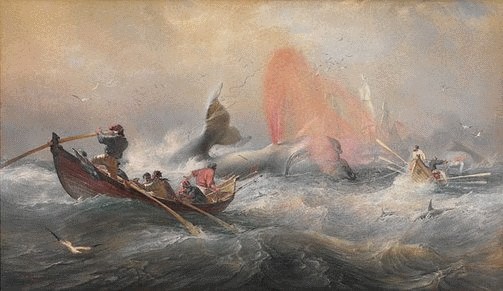 The Early Days of European Whaling​​

The first European whaler in Twofold Bay was Thomas Raine in 1828; his is thought to be the first shore based whaling station on mainland Australia. He was followed by the Imlay Brothers in the 1830s.

In the 1840s, Scottish entrepreneur Benjamin Boyd built a light house, now known as Boyd’s Tower and built a new town south of Eden known as Boyd Town. Along with his other enterprises in the district Boyd set up a whaling station at Twofold Bay. The whaling operation was managed by Oswald Brierly (1817-1894), a talented artist who had come to Australia with Boyd in 1842 and left many paintings, sketches and diaries covering the years he lived at Eden.

The inexperienced Brierly was put in charge of 9 deep-sea whalers, 30 whaleboats and supervised the flensing and the boiling down processes. He managed the whaling venture well but in 1848 as Boyd’s empire neared collapsed Brierly accepted the invitation of Captain Owen Stanley to join him as his guest in H.M.S. Rattlesnake on a survey of the Barrier Reef, the Louisiade Archipelago and part of the New Guinea coast.

Oswald Brierly described in his diaries the Orcas behaving much as they would later when helping the Davidson whalers but the early whalers did not reward their efforts and would drive them from the kill. Brierly described how the Killers would sometimes drag a harpooned whale with boat attached under water when the early whalers did not honour ‘the law of the tongue’.

Boyd’s schemes proved too grandiose and by 1849 his empire had collapsed. His whaling enterprise along with that of the Imlay brothers was taken over by George Barclay and Solomon Solomons who operated until 1857.

Many others followed Raine and the Imlays into the whaling trade at Eden but there was one family of whalers that is particularly remembered.

The Davidsons and the Killers of Eden

Amongst the carpenters working on the construction of Boyd Town was a recent immigrant from Scotland, Alexander Davidson.  In 1857 Alexander and his son, John, began shore based whaling with boats and equipment purchased from Barclay and Solomons. With help from the killer whales the Davidson family worked in the industry for four generations.  Their boats crewed almost exclusively by family members and local Thawa men.

The story of Old Tom Old Tom the killer whale is well known. He and his pack alerted the whalers to the presence of the whales by going to the Davidson whaling station and flop-tailing (slapping their tails on the surface of the water) until the whalers came out and joined the hunt in their small row boats. It was said that if the whalers lost sight of their guides they would slap their oars on the water and the lead Killer would turn back to ensure the whalers kept up.

While some of the Killers alerted the whalers to the presence of whales, other members of the pod would herd the whales into the shallow waters of the bay like dogs herding sheep. They often led the attack, harassing, biting, driving the whales underwater where they could not breathe, and even attempting to cover the blow holes of the whales. Sometimes the Killers were less helpful and like all intelligent social animals liked to play as recalled by Effie Davidson.

In return for their assistance the Killers were awarded a special treat; the lips and tongues of the whales, the only part of the whale ever eaten by Killer Whales (the tongue by itself weighs up to four tons). After a kill the Davidson crew would attach the dead whale to an anchor and buoy and leave it for the killer whales to take their reward.  They would row back two or three days later when the carcass had resurfaced and tow the body back to the try works at Kiah.

The Davidson Whaling Station was the longest operating whaling station in Australia but by the 1920s the Orca pod numbers had declined drastically, due it was believed at the time to the predation of Norwegian whalers operating in Australian waters.  When the last of the killer whales Old Tom died it bought to an end a fascinating era.

Old Tom’s body was first sighted floating in Twofold Bay by retired whaler Allie Greg who was soon joined by George Davidson and John Logan. At the suggestion of Logan it was decided, that Old Tom’s skeleton should be preserved and displayed in a museum.  George Davidson towed the body of his old friend back to shore.  At the Davidson Try-works George and his son Wallace cleaned and numbered the bones for reassembly, for which they were paid by John Logan for their time and expenses.

In January 1931 Logan advertised a meeting in the Magnet newspaper to discuss how to preserve and house the skeleton. The skeleton was initially displayed at the Twofold Bay Development League Rooms in Imlay Street. One shilling was charged for admission to see Old Tom’s skeleton and seventy pounds raised from the exhibition given to the Imlay Shire Council for the funds were put towards the establishment of The Killer Whale Museum in Eden. The building of the museum was completed in 1938 and opened its doors finally in 1939.

Much of the history of Eden’s whaling industry has been preserved, including the skeleton of Old Tom which can be seen at the Eden Killer Whale Museum. Today the town’s main connection to the whales is through sightseeing and research, with many overseas scientists studying the marine life in the waters around Eden at the Sapphire Coast Marine Discovery Centre.

In 2005, the Australia Broadcasting Corporation produced an award winning documentary, ‘Killers of Eden’, based on the book. In 1999 the ABC’s Beatrice Barnett produced a radio feature “Whaling in Eden” for Radio National’s Hindsight program, interviewing those who were witness to these remarkable events.

Hawkesbury Gazette: The King of the Killers.

Also on this site “An Old Lady Remembers: Published in Rene Davidson’s book and reproduced here are the often poignant reflections of Euphemia (Effie) Davidson, wife of John Simpson Davidson as told to her niece in 1940 two days before Effie’s 100th birthday.

Historical Images of Eden’s whaling history can be found at the website of the National Library of Australia.

An interesting interview with Lynne Thomas, daughter of Yuin elder Guboo Ted Thomas, can be heard at ABC South East radio. Lynne tells some of the stories she was told by Guboo, and in rare recordings we hear Guboo telling stories of his family working as whalers in the early 20th century, and a childhood experience of being taught how to call in the dolphins so they would drive fish to the shore.