At the time of early European settlement much of the land was unknown to the new settlers. Some of them made good use of the Aborigines excellent knowledge of the local area. The Aborigines were able to show them where to find water, good camping areas and the best tracks through the bush.

When Benjamin Boyd arrived in Twofold Bay he was interested in opening a road from Twofold Bay to the cattle and wool growing district of Monaro. Boyd believed that a road from the Monaro to the coast would allow him to transport his goods to the cities faster than the overland service because the goods would be loaded onto his fleet of sailing vessels which operated out of Twofold Bay. To investigate the prospect of a new road Boyd, Oswald Brierly and Toby (aka Budginbra or Budginboro), an Aboriginal friend and guide from Twofold Bay, began a journey to the Monaro in December 1842.

A Journey to The Monaro – Extracts from diary of Oswald Brierly

Concerning Budginbra: “We were first struck by the clear manner in which he answered our enquiries about the customs of the Aborigines and in his quickness when we were obtaining from him the native manner of different objects. In giving these he would never be satisfied until we accented them properly repeating them over several times until we had caught the right sound, and then going on to others. Once when we did not quite understand what he wished to describe he asked for the pencil he had seen used in sketching and drew the object…”

“Up at daylight, and started on our pathfinding expedition to the Monaro country taking our friend Toby with us as our guide. Toby dressed in a white jacket and trousers which we had given him accompanied us as guide and carried our supplies of salt meat and flour suspended to his saddle in two bags and several tin pots for boiling our tea attached by a strap to his waist.”

“Upon leaving the Bay we struck at once to the forest keeping a general north westerly direction and began to ascend the mountain ranges that overlook the Bay. The country for miles had been swept by bush fires, and for some hours after starting we rode through a most dreary looking forest of blackened gum trees, without a blade of grass or sign of vegetation.”

“Toby having found a fine grassy flat for the horses and turned them loose in their hobbles, set about preparing our accommodation for the night. A young sapling secured horizontally about four feet from the ground, and placed between two young trees formed the ridge pole against which he placed a number of large sheets of bark, stripped from the trees near in a sloping position so as to form a roof, on the ground, he then collected a quantity of dry grass for bedding and nothing could be more comfortable than our quarters for the night.”

Started on our return to the Bay.”

There was a track to Hibbert’s at Cathcart then down by Tantgloangle. Imlay’s horse-station was at river-side at Tantgloangle. About 2 in the afternoon, we reached a station called Candolo, where we were entertained very hospitably by Mr Peter Imlay, who pressed us to remain for the night. A good garden, raspberries and a school. But wishing to reach “Pampoola” nearer the Bay, we pushed on again after remaining about an hour.”

The party returned to Twofold Bay on Jan 3rd 1843.

Images from Brierly’s journal can be viewed online at the Library of NSW.

Mark McKenna, author of the award winning history of European settlement, ‘Looking for Blackfellas Point’, has been researching Brierly’s journal and the significance of his writing and sketches. The interview can be viewed at ABC South East NSW. 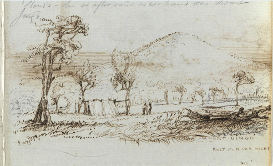 Halt for the night MT GINGO (Jingara Rock near Wyndham)