Wilderness Coast– Time Travel And The Evolution Of A Continent

The rocks of the Wilderness Coast span nearly half a billion years of geological time!

Stretchings and compressions of the earth’s crust, formation and splitting of supercontinents, and movements of tectonic plates over millions of years have produced three very different time-rock groups, seen from Bermagui to Eden. This geo-diversity attracts researchers and students, who come here every year on field trips to ‘time travel’, work out the range of environments recorded in the region’s rocks, and trace the evolution of this place from deep ocean to stable continent.

Rocks tell us their stories – how they were formed and what has happened to them during the ages that have passed since they were born. Looking at the outcrops exposed today, we can start to understand the very different past environments they record. We can also imagine the unseen – changes in the earth and oceans that have left no visible rock record in this region.

The three rock groups can be visited around Eden and Twofold Bay. A good place to start looking is at Eden’s Lookout, on Middle Head, just beyond Snug Cove, home of Eden’s famous fishing fleet. Expansive views of the great bay with its backdrop of forested hills let us appreciate not only a beautiful landscape, but also the role played by the rocks forming that landscape.

Majestic Balawan, one of the three sacred mountains of Australia’s Coastal Wilderness, stands sentinel over the innermost parts of Twofold Bay. More commonly known by the name Mount Imlay, the mountain’s top is visible far out to sea.

Balawan has a conical shape resembling a young, active volcano when viewed from the Lookout. But the distant landscape is old. Mount Imlay is not a volcano and never was. It is an erosional form, capped by resistant sandstone, seen as a pimple at the summit. 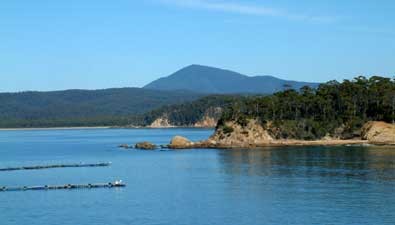 The huge arc of Twofold Bay’s southern and western parts is a sea-carved landscape formed in soft sandstone and mudstone since the sea rose to its present level 6000 years ago. During the last ice age that ended about 20,000 years ago, a great river flowed through a rocky gorge across what is now Twofold Bay. The drowned gorge is now filled with sand It is clearly visible in sonar maps of the sandy bay floor. These maps are on display at the Sapphire Coast Marine Discovery Centre in Snug Cove.

Boyd’s tower, built as a lighthouse in the 1840s but never used for that purpose, sits atop the long, sloping southern headland of Twofold Bay. Both headlands of Twofold Bay are formed of ancient river sediment – pink sandstone and red mudstone – deposited during the Devonian period 360 million years ago.

The rocks exposed around Twofold Bay run approximately northwest-southeast, so the bay cuts a cross-section through them. The oldest rocks surround the inner parts of the bay, and geologically younger rocks form the north and south headlands. Erosion-resistant volcanic rocks forming the high land at the lookout and its mirror image chip mill headland halfway across the bay have divided the bay into two parts and given it its name: Twofold Bay.

The Ordovican period - a deep ocean 440 million years ago

The cliffs between Boydtown and Cocora Beach, south of Eden, are composed of sandstone and mudstone deposited in a deep ocean during Ordovician times. An ancient continental land mass lay well to the west, but sediment shed off that land slumped down its marine slopes and canyons as water-charged slurries. The suspended sediment spread out on to the flat abyssal plain, where it was periodically re-worked by sea-bottom currents.

On some of the rock platforms and rocky bars fronting the cliffs, fine layers and wavy layers can be seen, recording the gentle settling of sediment and the slight disturbances to the layers as they were lifted and re-settled by currents.

Since they lay on the sea-bottom, these sediments have been folded, faulted, crunched and cooked to form solid, but still soft, rocks. This all took place in the 80 million year time interval for which there is no rock record in the region. We can only guess at the burial, heating and deforming processes that took place to turn soft sediment into rock. The rocks were uplifted, forming land, eroded and submerged again, over and over in their long history. In the cliffs at Quarantine Bay, the original flat layers are standing nearly vertically. The layers form the rocky bars in the intertidal zone.

Although animals lived in the Ordovician oceans, these rocks are so mangled that fossil remains are not preserved.

The Devonian – Australia's Yellowstone 380 to 360 million years ago

By Middle Devonian time, south eastern Australia was a hilly land mass bordered by shallow seas or large lake systems. The land mass formed part of the supercontinent Pangea. The continental crust of Pangea began to stretch and thin in response to changes in the motions of the tectonic plate margin to the east.

The newly forming rift basin was similar to modern rift basins such as those forming today in the East African Rift. Volcanic activity began, as hot rock exploded through the thinned crust. The main areas of subaerial volcanism were along the eastern part of the Eden region and around Tathra. Parts of the area were like the active volcanic region of Yellowstone in north western United States.

At Eden, the shoreline around the wharf area at Snug Cove and the lookout on the headland in the heart of Eden are places to see volcanic features. The headland – Middle Head – gives Twofold Bay its name, jutting proudly out into the great bay, separating it into its two ‘folds’. The headland is made of hard, erosion-resistant volcanic rock.

Across from the lookout stands the white pole of the ‘lighthouse’ leading the way to Snug Cove. Below the lighthouse, the massive cliff is formed from ignimbrite.

The cliff is a cross section through two separate ignimbrite flows tilted towards the ocean. Ignimbrites are not liquid lava flows, but superhot clouds of sticky ash particles, so charged with gases that they flowed like water. These flows would have originally been laid down flat, blanketing underlying topography. The almost vertical structures in the cliff are fractures separating hexagonal columns that were formed as the rock shrank slightly during cooling.

The glowing ash clouds gradually lost gas and cooled as they blanketed the landscape until they became the consistency of toothpaste. Bubbles of gas became ‘frozen’ in this sticky rock as it finally set solid. Some fossil bubbles, now filled with soft greenish clay minerals, can be seen embedded in the solid rock at the back of Cobbly Beach, on the western side of Snug Cove, in the Port of Eden.

Eruption centres were surrounded by fumaroles emitting hot water and steam, similar to today’s volcanic fields such as Yellowstone in north western United States, or Rotorua in Aotearoa – New Zealand. This hydrothermal activity altered some parts of the volcanic rock inland from Pambula to a soft, easy to carve clay-like mineral, pyrophyllite.

When volcanic activity died away, the Wilderness Coast region returned to a stable land mass. Large rivers flowed across the landmass depositing coarse pink sandstone and purple pebble conglomerate in their channels, with fine-grained red mudstone on the floodplains. A slight rise in sea level inundated shallower areas to form lagoons. When sea level fell again, rivers extended across the land again, burying the lagoonal muds.

The Devonian – the Age of Fishes (360 million years ago)

Not for nothing is the Devonian known as the Age of Fishes. Dozens of species of enormous armoured fishes evolved to live, breed and die in Devonian rivers and seas.

The coastline of the Sapphire Coast between Tura Beach and the Victorian border is composed largely of these red, riverine rocks. Here and there on rock platforms the scattered remains of the platy armour of fishes can be seen. Sometimes entire corpses of these fishes are preserved where they died, trapped in drying billabongs and rapidly buried by sediment carried by the next flood. Casts of some of these fishes are on display at the Eden Killer Whale Museum.

Our coastline a happy hunting ground for fossil fish researchers. It has even yielded species new to science, making it a world-class fossil fish site. A new species of fossil fish from Eden has been named Edenopteron.

To date 9 species of armoured fishes (Placoderms) 4 species of spiny fish (Acanthodians) 2 species of cartilaginous fishes, the early sharks (Chondrichthyans) and 9 species of bony fishes (Osteichthyans) have been listed in the area.

The reddened rocks mark a great leap upwards in atmospheric oxygen as land plants began to cover large parts of Earth. Roots of plants that grew on river floodplains can be seen in the red mudstones behind the building at Merimbula Wharf.

The geoheritage importance of Eden

The increasingly oxygen-rich atmosphere generated by land plants encouraged the development of lungs instead of gills, and gave rise to the first amphibians and land-dwelling reptiles. The oldest tetrapod (four footed) trackway in the world is found in Devonian rocks just across the NSW-Victoria border.

The area is not only an ancient Garden of Eden populated with abundant plant life, but also a place of long-ago biodiversity in land and in water. This biodiversity continues today on our Wilderness Coast.